Training camps of Dynamo (Kyiv) with the participation of the ambassadors of Brave GK
26.01.2022

On January 17, the Dynamo football club went to the first winter off-season training camp in Spain. For ten days, the team will train and participate in test matches under the leadership of Mircea Lucescu. Geographically, training camps are held at a training complex in the province of Alicante in the southeast of the Iberian Peninsula.

At the moment, the Kyiv club has managed to hold three of the four friendly games - against the clubs "Atletico Pulpileno", "Racing Union" and "Real Murcia". In all three cases, the team of Kyiv gained an impressive victory. 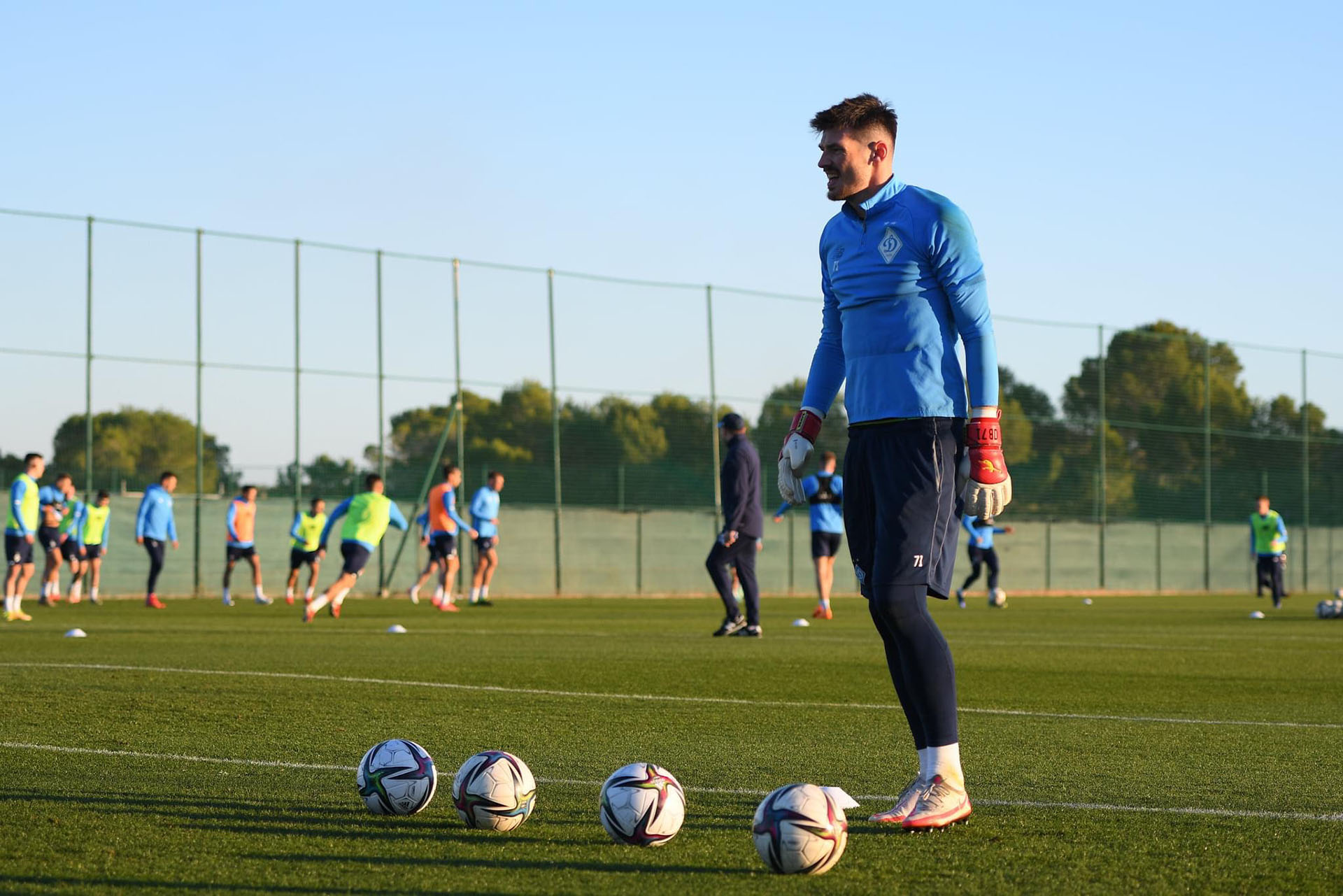 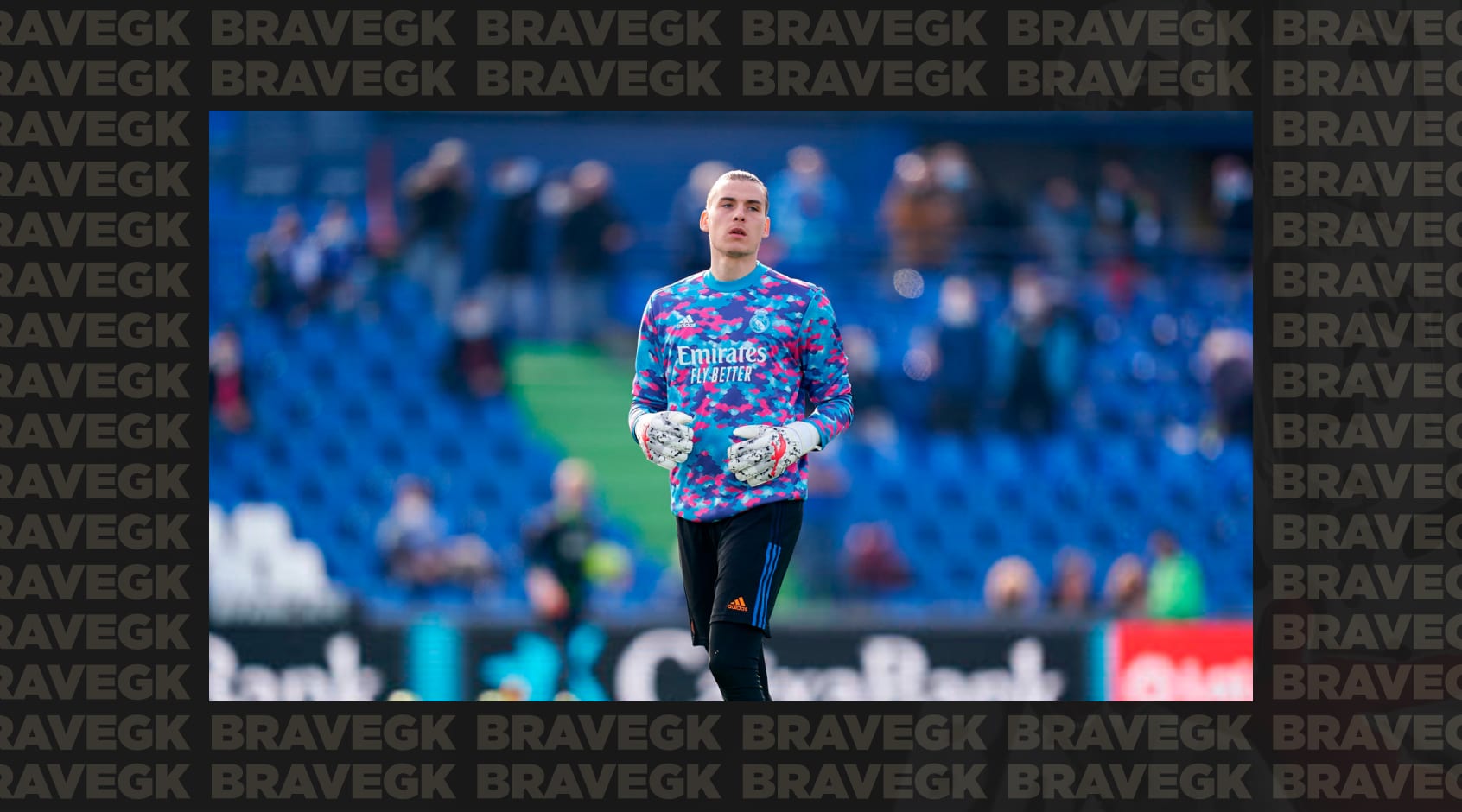 In their first match of 2022, the "white and blue" against the Spanish club "Atletico Pulpileno" scored four goals and did not miss a single one in their own goal — it would seem that our team has complete superiority, but not everything is so clear. Firstly, all the goals were scored only in the second half, when Lucescu significantly changed the squad, releasing many young players, thereby "reviving" the game. Secondly, the Spaniards carried out a lot of positional attacks in the first half and, in general, played well, which created a significant problem for the Kievans. Nevertheless, even after a long vacation, the capital club managed to show an excellent result. The goals were scored by Tsyhankov, De Pena, and Buyalskyi.

In the second test match of the Spanish training camps, Kyiv met Racing Union from Luxembourg. This club plays in the elite division of the national championship and, it seemed, could compete with Kyiv´s team. However, in the first half Dynamo scored three goals: by Kulach, Verbich, and Tsygankov. In the second half, the young midfielder Volodymyr Brazhko managed to take the ball from the opponents during the attack and increased the score to 4:0. In this match, the Kievans played more confidently.

It is worth noting that the coach of the capital club Mircea Lucescu actively experimented with substitutions. Both in the first and in the second match at the training camp in Spain, he gave playing time to various players, including goalkeepers. For example, in the match against Racing Union, the goal of Kyiv was initially defended by Heorhiy Bushchan, the ambassador of Brave GK, and already in the 2nd half - Ruslan Neshcheret.

The third match at the training camp in Spain turned out to be the most difficult for Dynamo. Already in the 7th minute, the Spaniards scored a goal as a result of a powerful attack. In total, three good shots were made at the goal during the attack — Denys Boyko managed to repel the first two, but the third turned out to be more difficult. The Kievans managed to win back in the 19th minute: Kulach effectively shot at the goal after an unsuccessful free-kick by De Pen.

The teams went to the break with a score of 1:1.

The second half turned out to be very tense, but not a single goal was scored until the 84th minute. It seemed that Dynamo would never be able to defeat the Spanish club, but they still managed to get ahead as a result of a beautiful attack by Tsyhankov and Shaparenko. It took another three minutes for Buyalskyi to score the third goal against Real Murcia. As a result, Dynamo won an interesting, strong-willed victory 3:1.

It should be noted that Denis Boyko played in the goal for the Kyiv club in the first half, and Valentyn Morgun played in the second half. 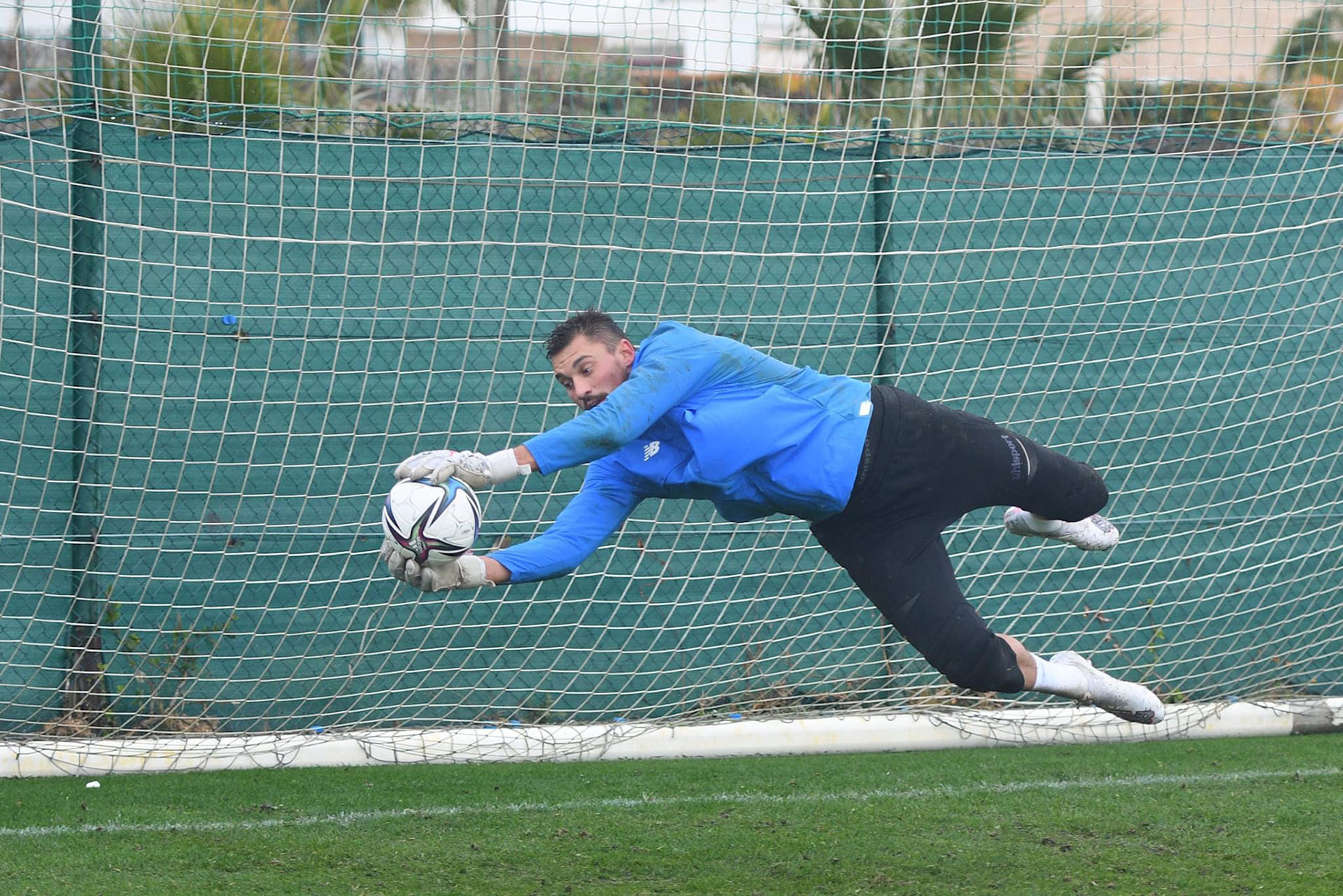 What do the Dynamo goalkeepers say about the training camp in Spain?

The Dynamo players themselves speak positively about the training camp in Spain. After the first two matches, the goalkeepers say that the Kievans “are in good condition, have gained good momentum and are gradually laying the foundation”. In addition to the traditional goal defense tasks, goalkeepers play squares a lot. "Leg kicks by goalkeepers is now one of the most important elements of the game, and we are doing everything to be at a high level”.

To the question “What are the nuances in the work of goalkeepers in this weather?" - meaning partly cloudy and relatively high humidity - Dynamo goalkeepers say that "you need to be more careful when the pitch and the ball are slippery. The speed of the ball sliding is higher and you need more concentration."

Heorhiy Bushchan notes the excellent weather conditions at the training camp in Spain and the quality of the field, and also says that he likes to play with his feet. "The weather is good, the field is good, the conditions are good, so we are preparing with a smile for the second part of the UPL season. The weather is just great: not hot and not cold, exactly what you need for games and training. Therefore, we get a lot of pleasure. Goalkeepers play a lot on the field. I managed to score a goal today, so I really like playing with my feet in training," Bushchan shares his impressions.

The winter training camp of Dynamo Kyiv in Spain will last 10 days, until January 27. Then the Kyiv’s team will go to Turkey. In total, the training camp will last 30 days. 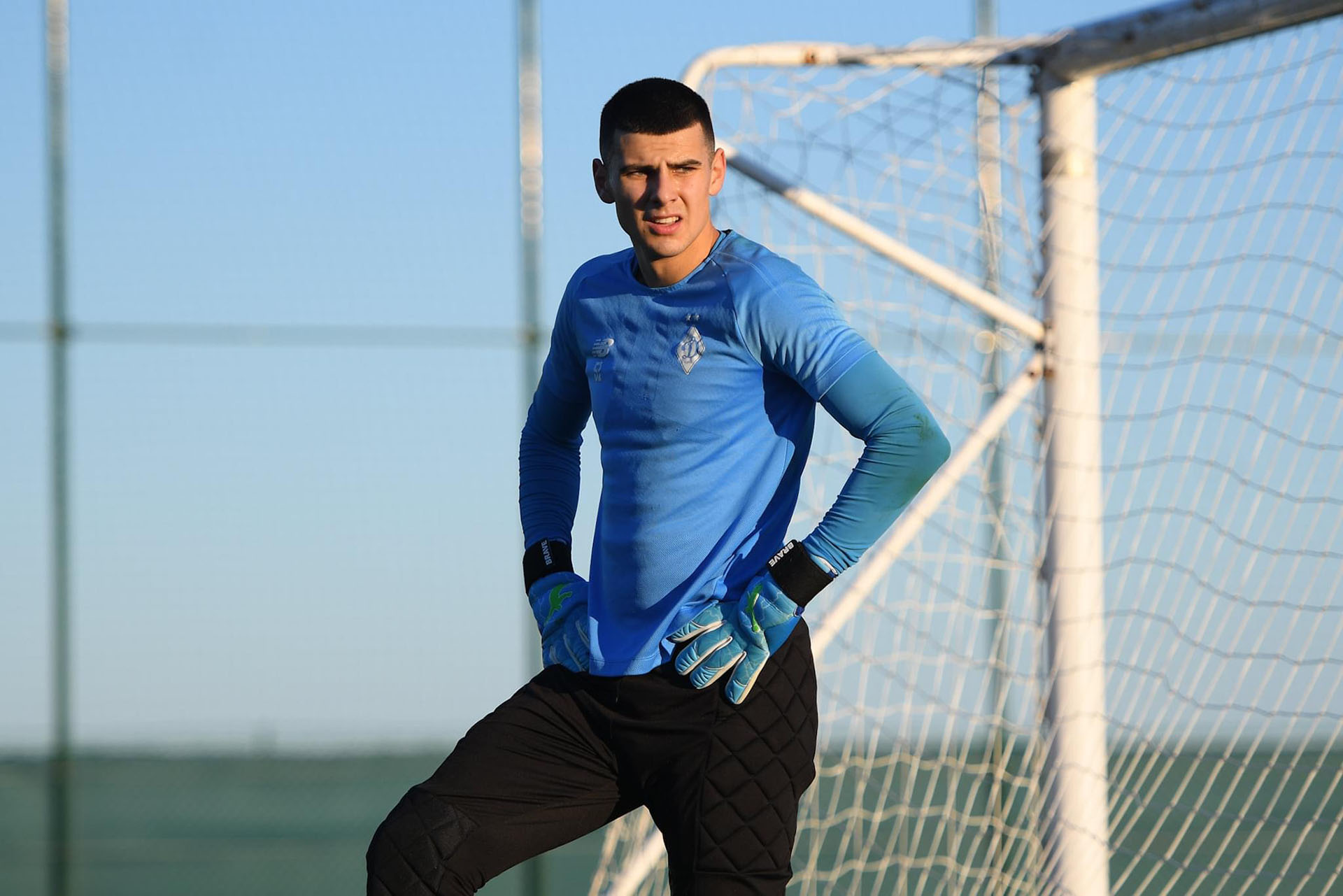 There are four goalkeepers in the Dynamo first team - Heorhiy Bushchan, Denys Boyko, Ruslan Neshcheret, and Valentin Morgun. The last of them, 20-year-old goalkeeper Morgun joined the main cast quite recently.

Three of the four goalkeepers from Kyiv are ambassadors of Brave GK. Heorhiy Bushchan, Denys Boyko, and Valentyn Morgun take an active part in the life of our brand: they play and train in our goalkeeper gloves, test pre-production samples, and help to select the best materials and design.

Our friend and ambassador Denys Boyko took the Phantome Kong model, which was developed with his direct participation, to Spain. These gloves are based on the Brave GK Rain Pro model, have a modular three-piece design and a bright design. For the palm, we used an exclusive white aqua latex, which shows itself perfectly in wet weather. We are sure that Denis was able to appreciate the high level of grip with the ball at the training camp in the province of Alicante, where stable partly cloudy weather and high humidity (more than 70%) are now observed. 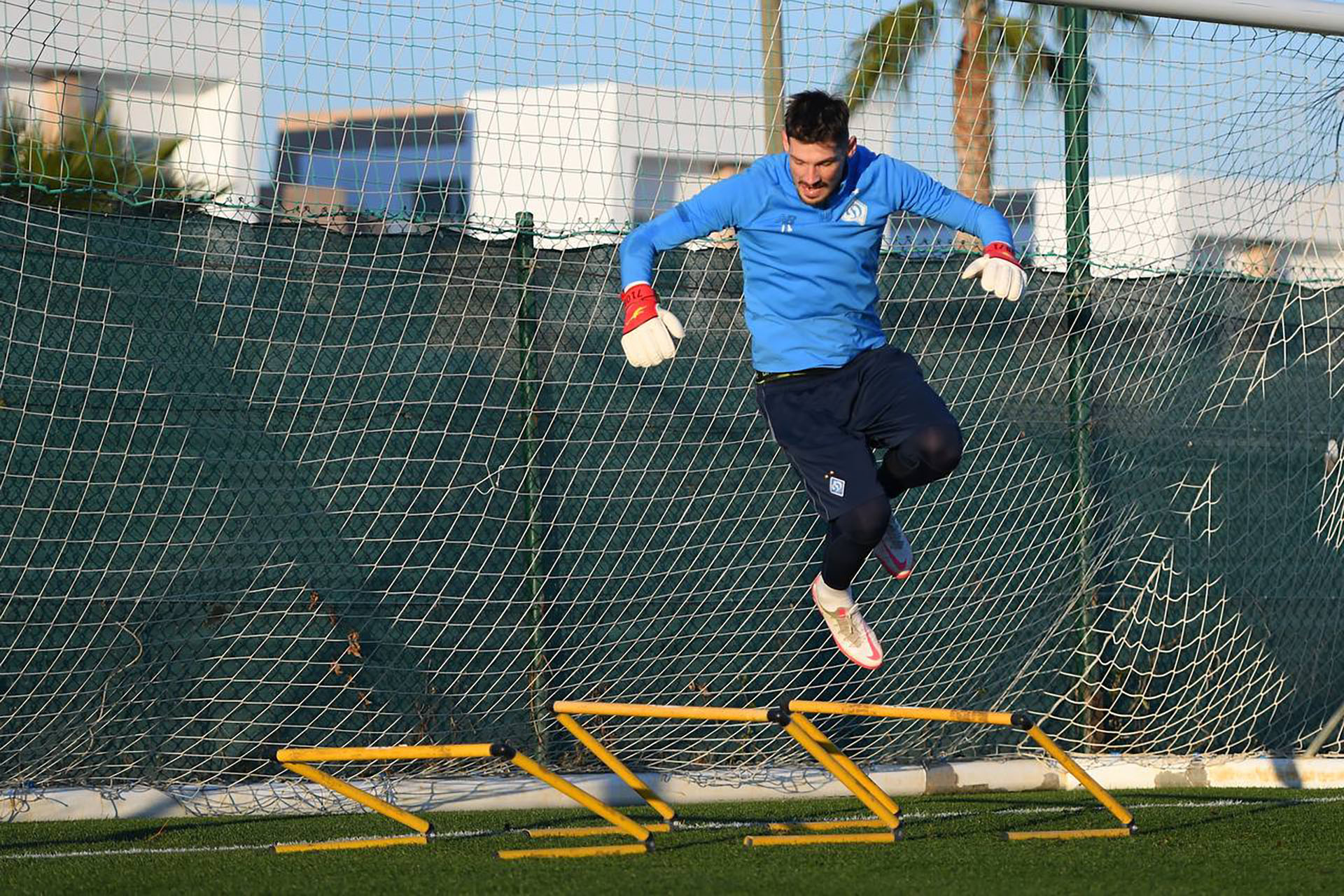 Heorhiy Bushchan received goalkeeper gloves Brave GK Courage White before the match of the national team of Ukraine with Bosnia and Herzegovina. This is a modified version of the gloves, optimized specifically for Heorhiy - with a unique palm design, specially selected latex, and with a reduced emblem. The Courage White model has a modernized Gecko cut and an original design. Bushchan notes a convenient fixation system and a tight fit, which do not reduce the overall comfort during the game and allow you to maintain a sensation of freedom. 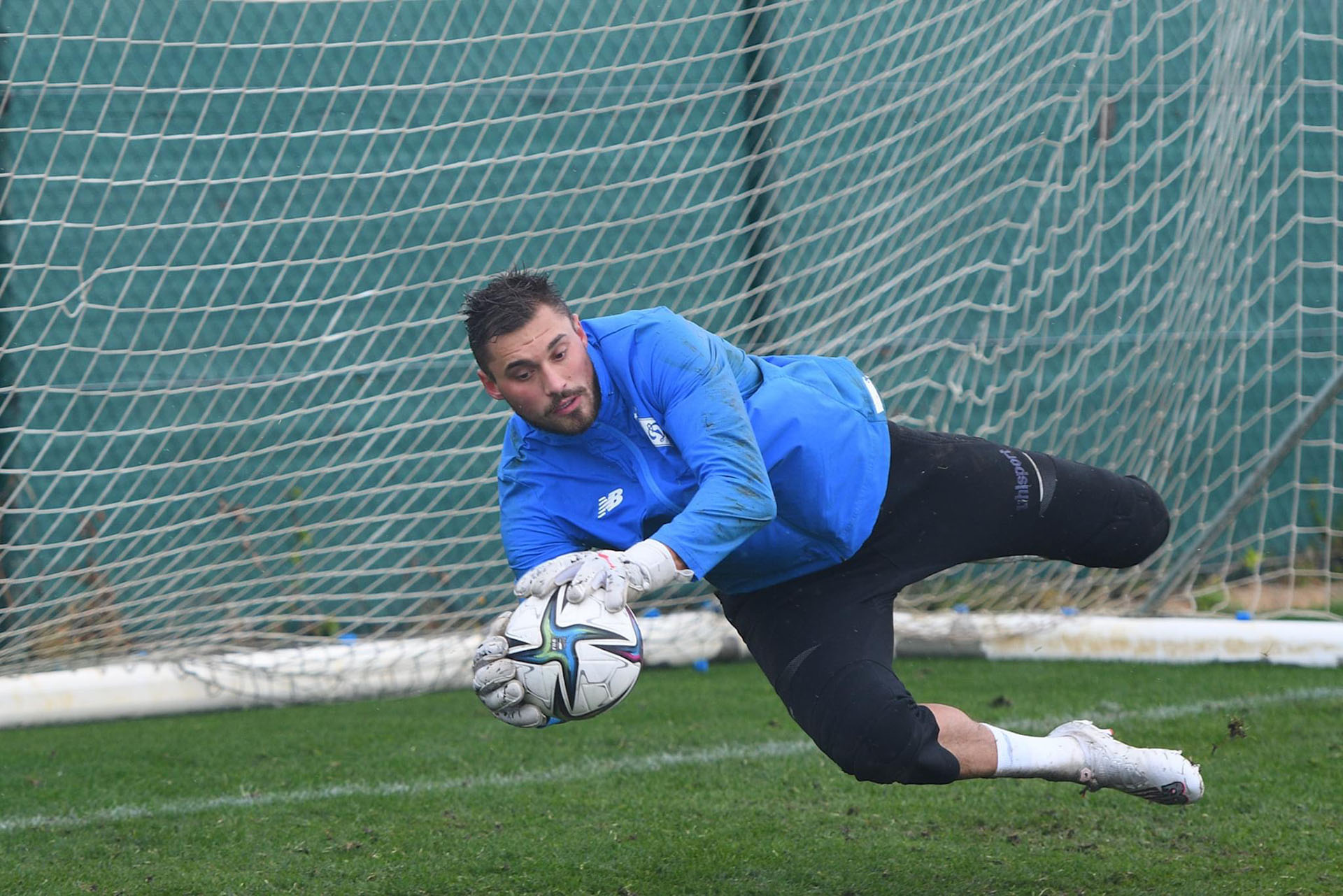 The youngest goalkeeper of Dynamo Kyiv took two models of goalkeeper gloves at once for winter training. First of all, this is Brave GK Fury Thunder, which allows you to unleash the potential and talent of a goalkeeper in any gaming or weather conditions. The main feature of these gloves is the new design of the thumb, which is made entirely of latex and provides a tight fit. Instead of a cut on the neck, we placed a rubberized two-turn cuff, which even better fixes the glove on the hand. Neoprene was used for the backside, and high—class blue aqua latex was used for the palm.

We recently developed a pre-production sample of Reaction gloves and gave it to Valentyn Morgun for testing - we wrote about it recently. So, Valentyn took a Reaction sample to the Dynamo training camp in Europe. The reaction is the next generation of Brave GK Phantom gloves. In it, we partially wrapped the thumb with an elastic mesh to provide greater comfort when bending the arm during the game and significantly changed the Backhand by adding a new 3D Punch Zone in a modern design. Between the backhand area and the elastic Velcro closure, we made an incision necessary for good wrist flexion. 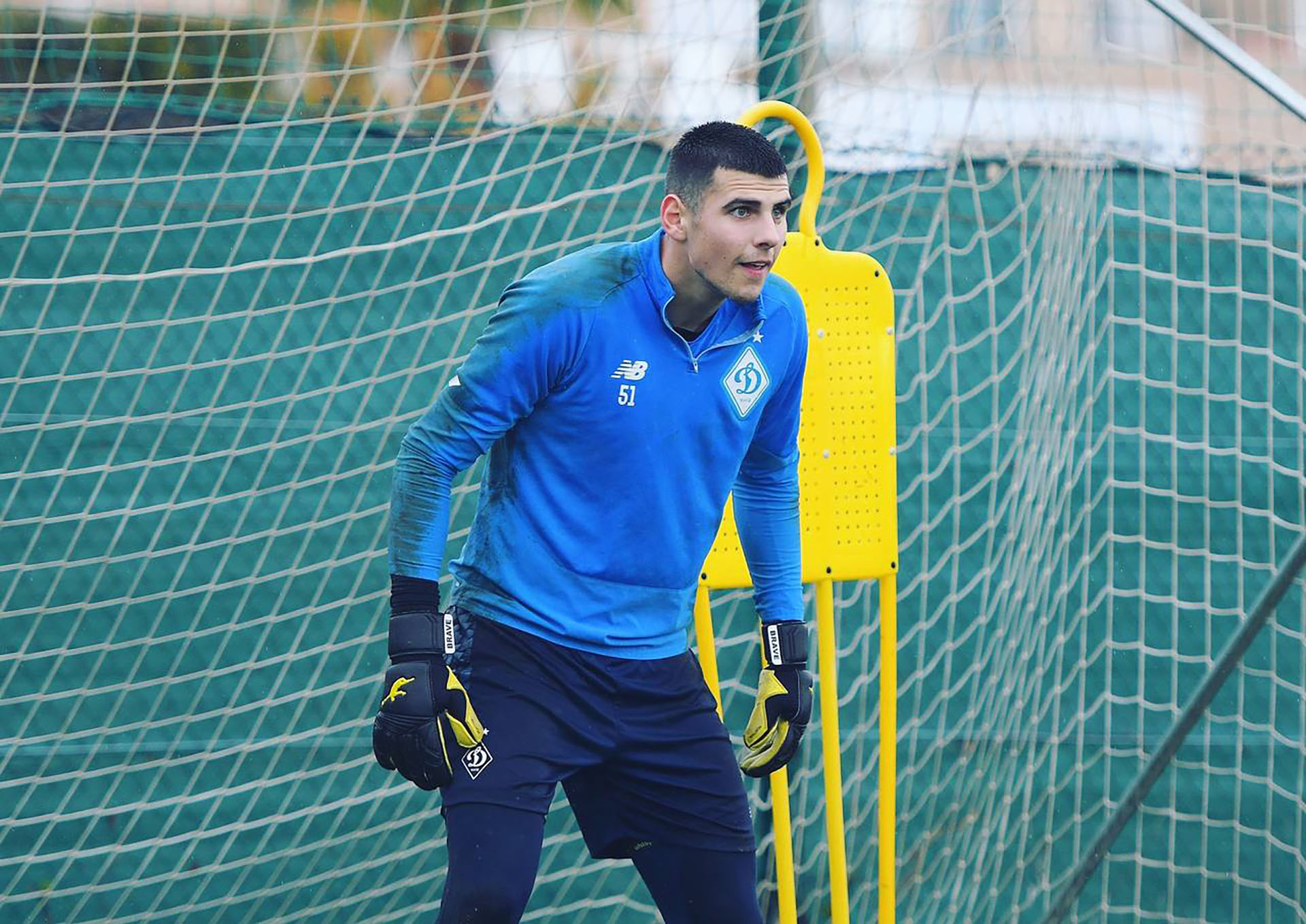 Ambassadors of Brave GK Heorhiy Bushchan, Denys Boyko, and Valentyn Morgun train and play in test matches in universal goalkeeper breeches Brave GK with modern elements of protection. This is an important element for the comfort, safety, and reliability of the goalkeeper. They are made of lightweight polyester, which transmits moisture well and provides the necessary thermoregulation, which makes it possible to use them in a wide temperature range. The protective elements cover the knees and thighs, which are most susceptible to injury. Goalkeeper breeches with a narrowed anatomical cut tightly fit the body and even during intensive training allow you to properly protect the player from injury.

Goalkeeper gloves Brave GK Phantome Kong, Brave GK Courage White and Fury Thunder, which are played by top Ukrainian goalkeepers from Dynamo, as well as goalkeeper breeches, can be purchased in the official Brave GK online store on this site. 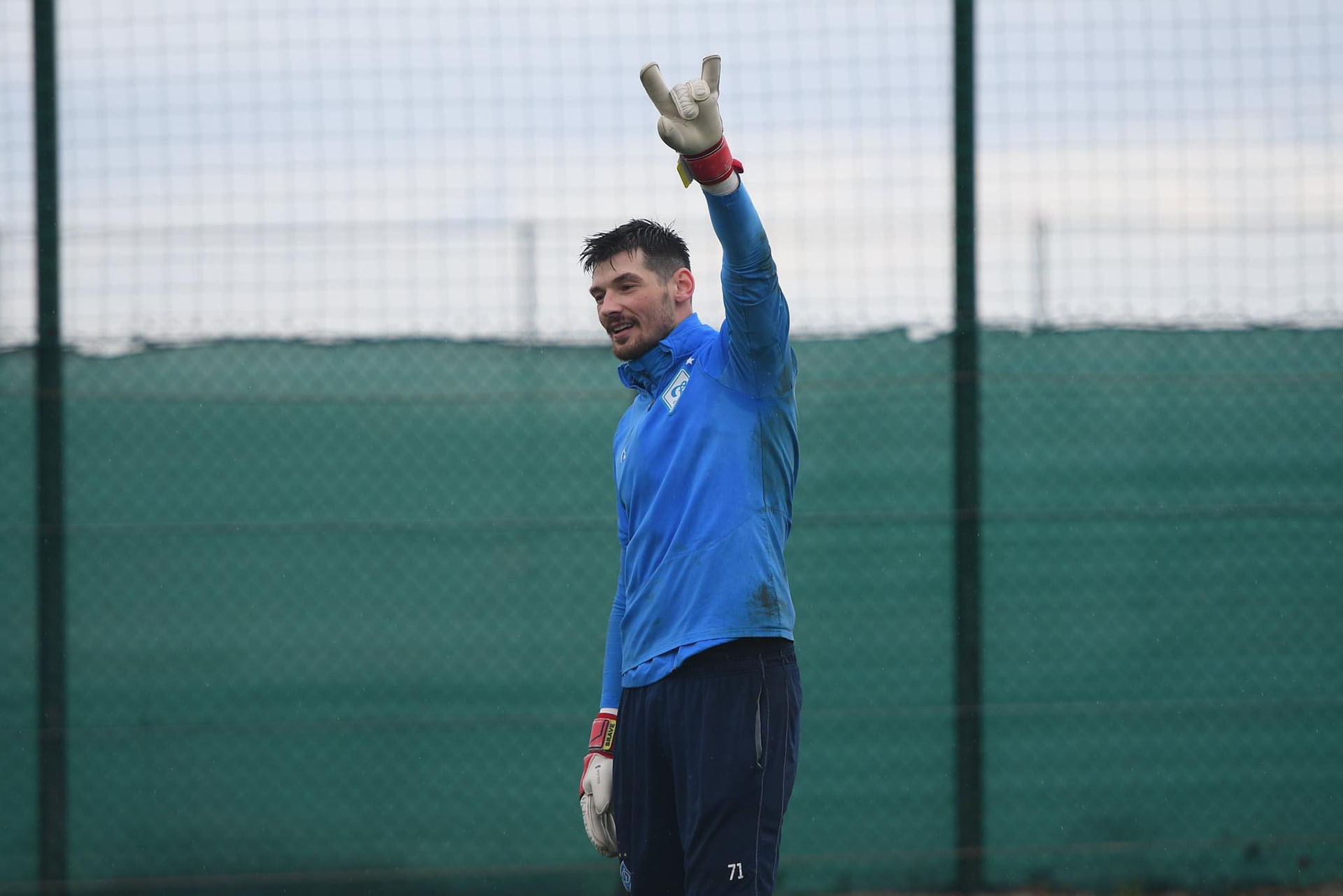