Results of the year: 10 achievements of Brave GK for 2021
Home

Results of the year: 10 achievements of Brave GK for 2021

The outgoing year 2021 has become one of the most successful and productive for Brave GK in the entire five-year history of the brand. We have developed and released 25 models of goalkeeper gloves, including 5 exclusive models for top Ukrainian goalkeepers Heorhiy Bushchan, Denys Boyko, and Bohdan Sarnavskyi. Goalkeepers of 12 of the 16 teams of the Ukrainian Premier League play in our gloves, our customers play in the Champions League and even in the top division of Spanish La Liga, and we are also appreciated by the male and female goalkeepers of the national team of Ukraine.

Finally, in 2021 we opened an office in Europe, and also expanded the network of distributors — now Brave GK products can be purchased in the Czech Republic, Latvia, Lithuania, Turkey, Poland, Hungary, and Norway. We have done a lot of work, and all this was done for you - loyal friends of Brave GK, who push us forward and take an active part in the life of the brand. Read more about our achievements for 2021 below.

In 2021, our team managed to develop and release 25 models - a fantastic result! The Brave GK line has goalkeeper gloves for every taste, with various features and suitable for all kinds of conditions - rainy or snowy weather, for playing on fields with natural and artificial turf. Among them there are Top-5 models that the Brave GK brand is especially proud of: they have invested the most effort and technology, they sell well, and represent our brand all over the world.

The Unique model is one of the first in the new history of Brave GK. These are trusted goalkeeper gloves created using advanced technologies and modern materials. In 2021, we released a legendary model in a new design and with some structural changes - called Unique. The model is offered with a new latex clasp, wider and stronger for reliable fixation of the brush and protection from injury. 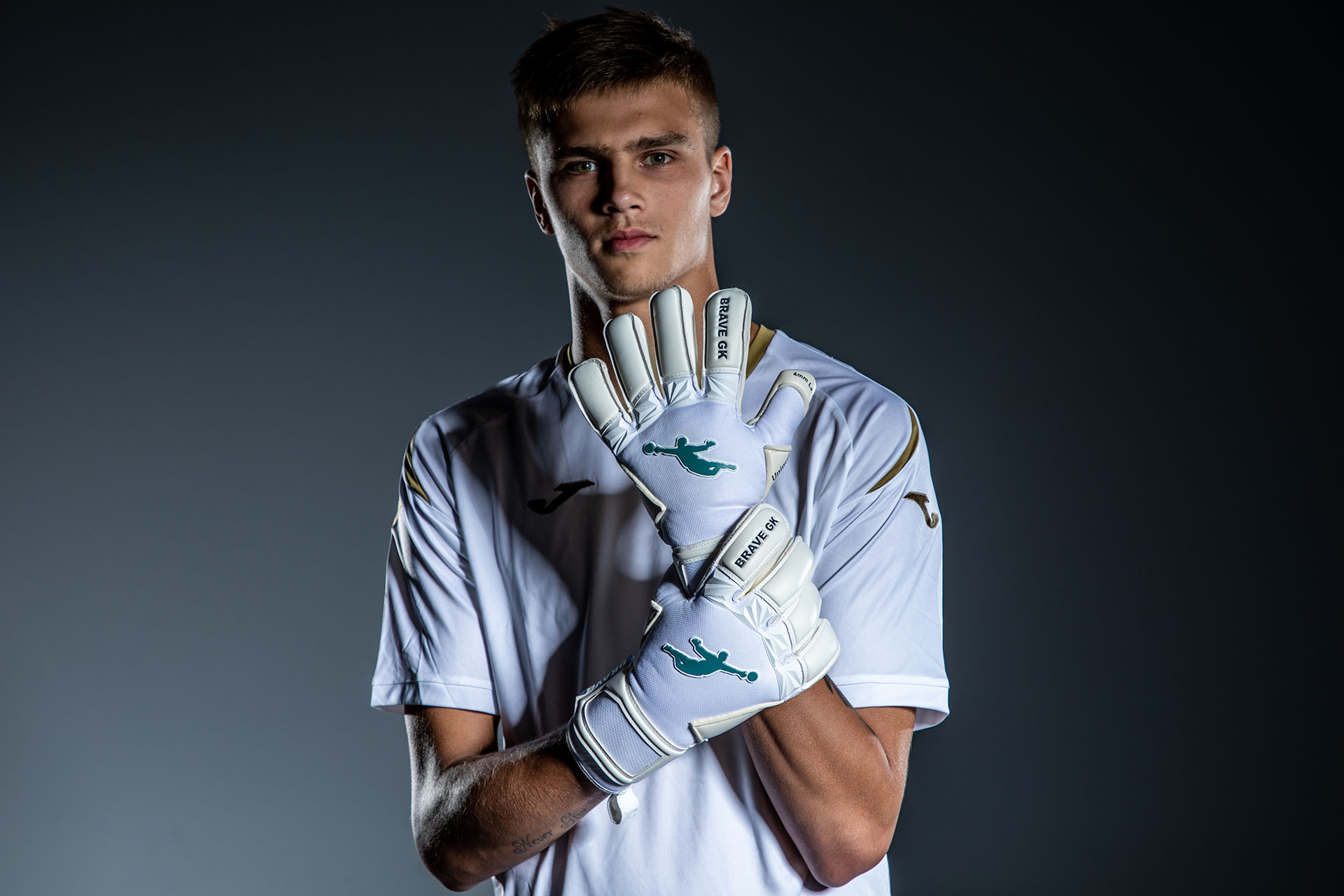 The Rain Pro model was released in 2021 in a new generation, with a significantly updated design - it includes three zones, namely the finger, the backhand, and the part for fist kicks. The last one is placed lower than before and has been significantly changed. Latex has also been added here, which minimizes the possibility of the ball slipping in this area and allows you to use your fist more effectively. We made another incision on the knuckles, which allows better fixation of the glove on the hand and gives the goalkeeper more freedom of movement during the game. 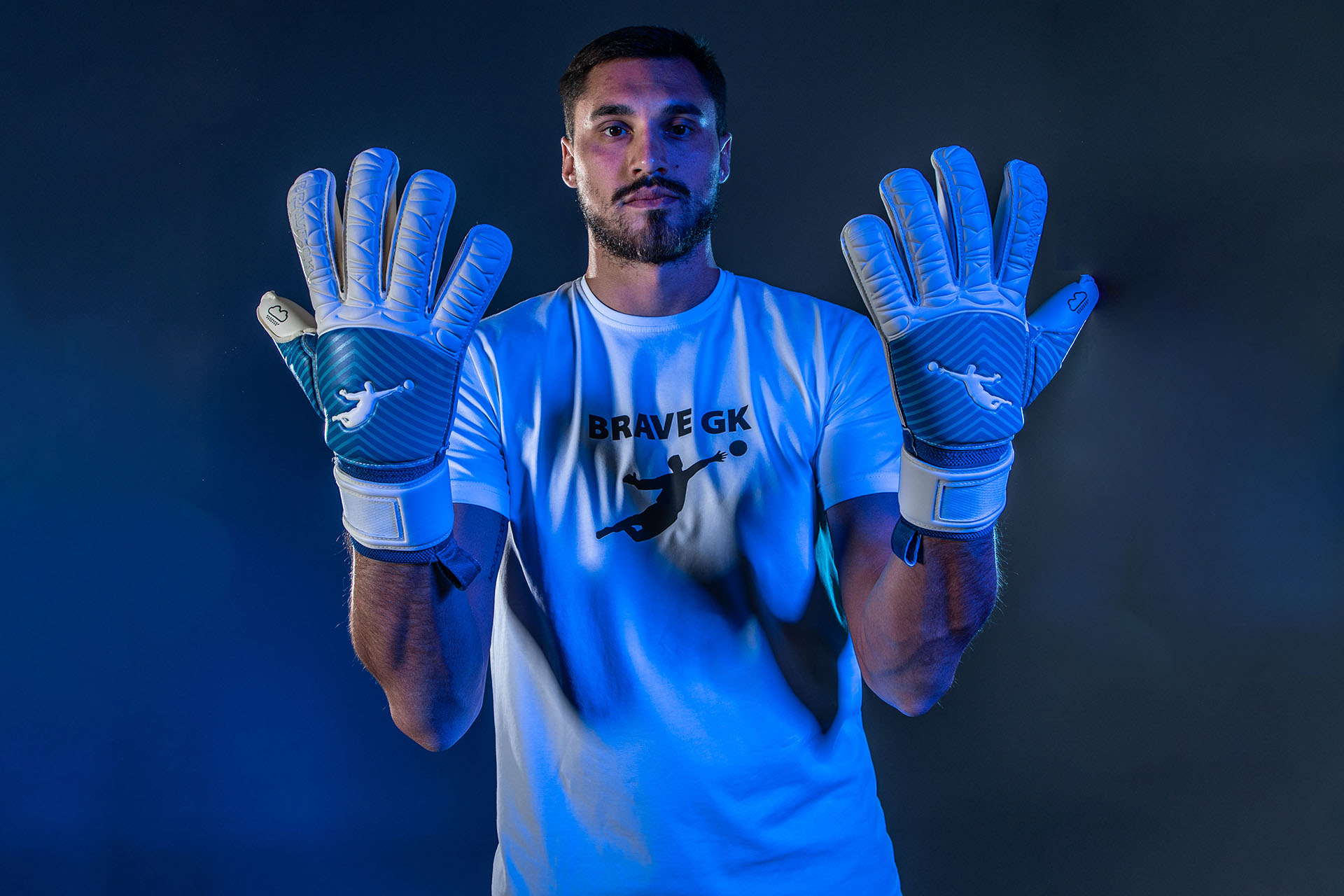 The central model of the new collection of Brave GK goalkeeper gloves, a showcase of the latest achievements of the company for 2021 is Evolution. Based on the Rescuer and Rescuer Work Hard gloves, the Evolution model improves their advantages, namely the lightness of the construction and a radically new level of fixation on the hand. We have used neoprene to create these gloves, added silicone elements to the 3D Punch Zone, and made a comfortable rubber cuff with double fixation. While working on Evolution, we were inspired by the current European trend of switching to lighter and more elastic materials. 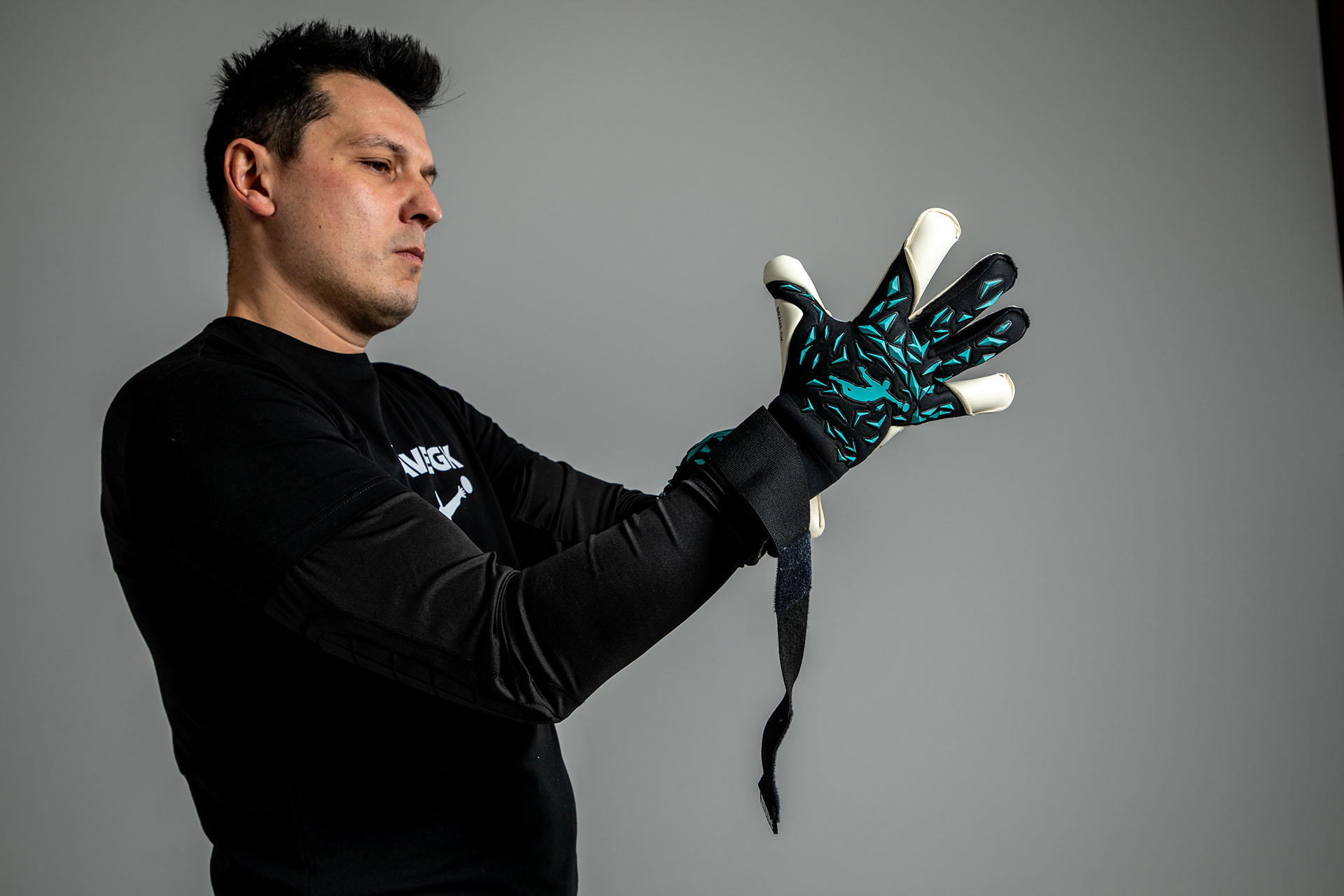 Fury is a real bestseller in the Brave GK model range. In the new version released in 2021, we changed the fist area: now it is made of silicone, which allows you to play effectively in rainy weather and be 100% sure that the ball will not slip during the game. Brave GK Fury gloves provide reliable support for the goalkeeper in every match and allow acting confidently in any situation. 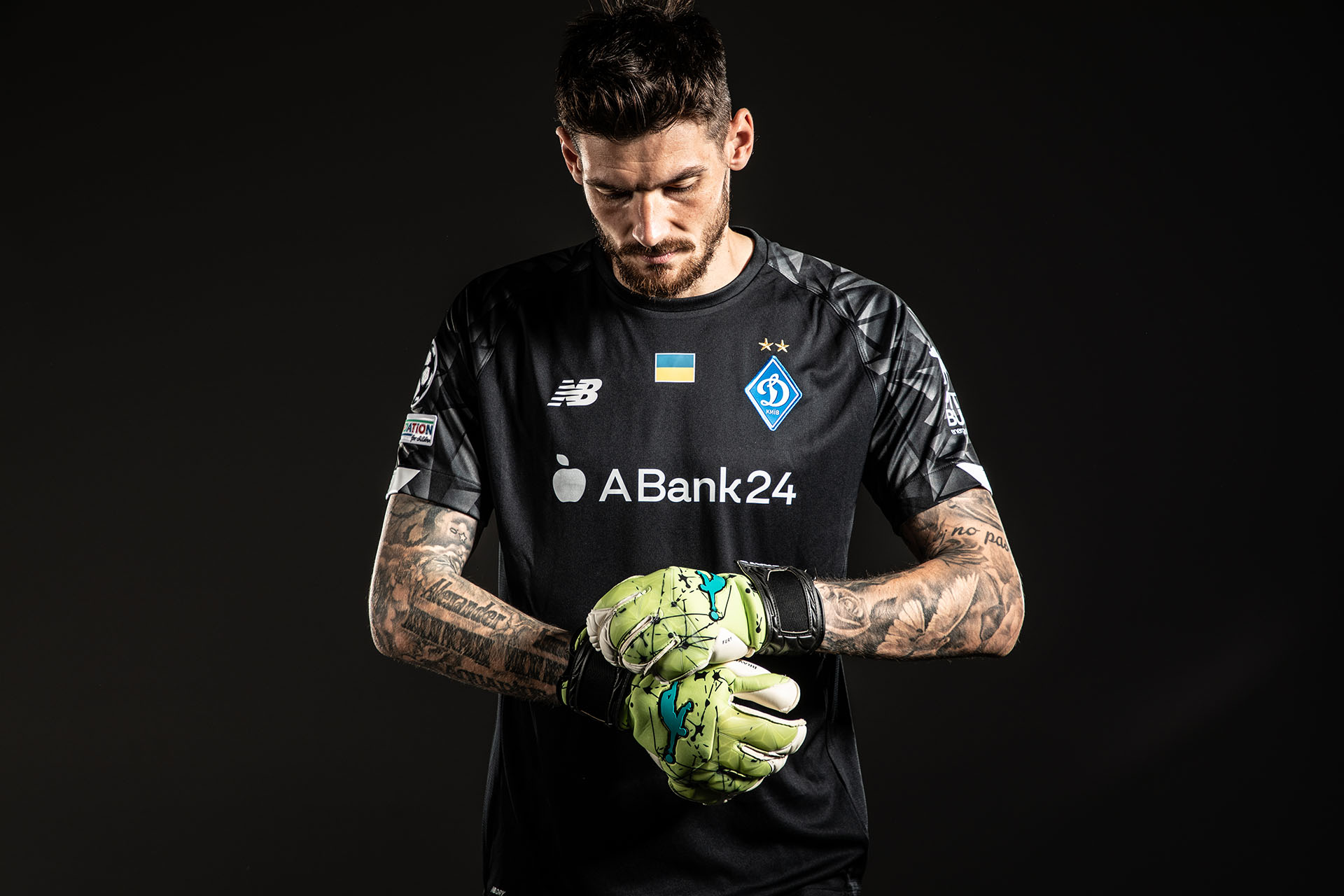 The Rescuer Work Hard model has a reinforced little finger and index finger, which provide a tighter fit and additional control over the ball. The key upgrade made last year is a latex fist area and finger embossing for a secure grip of the ball. Thanks to a convenient one-turn cuff with a personalization area, Work Hard gloves impress with a secure fit and a comfortable fit. 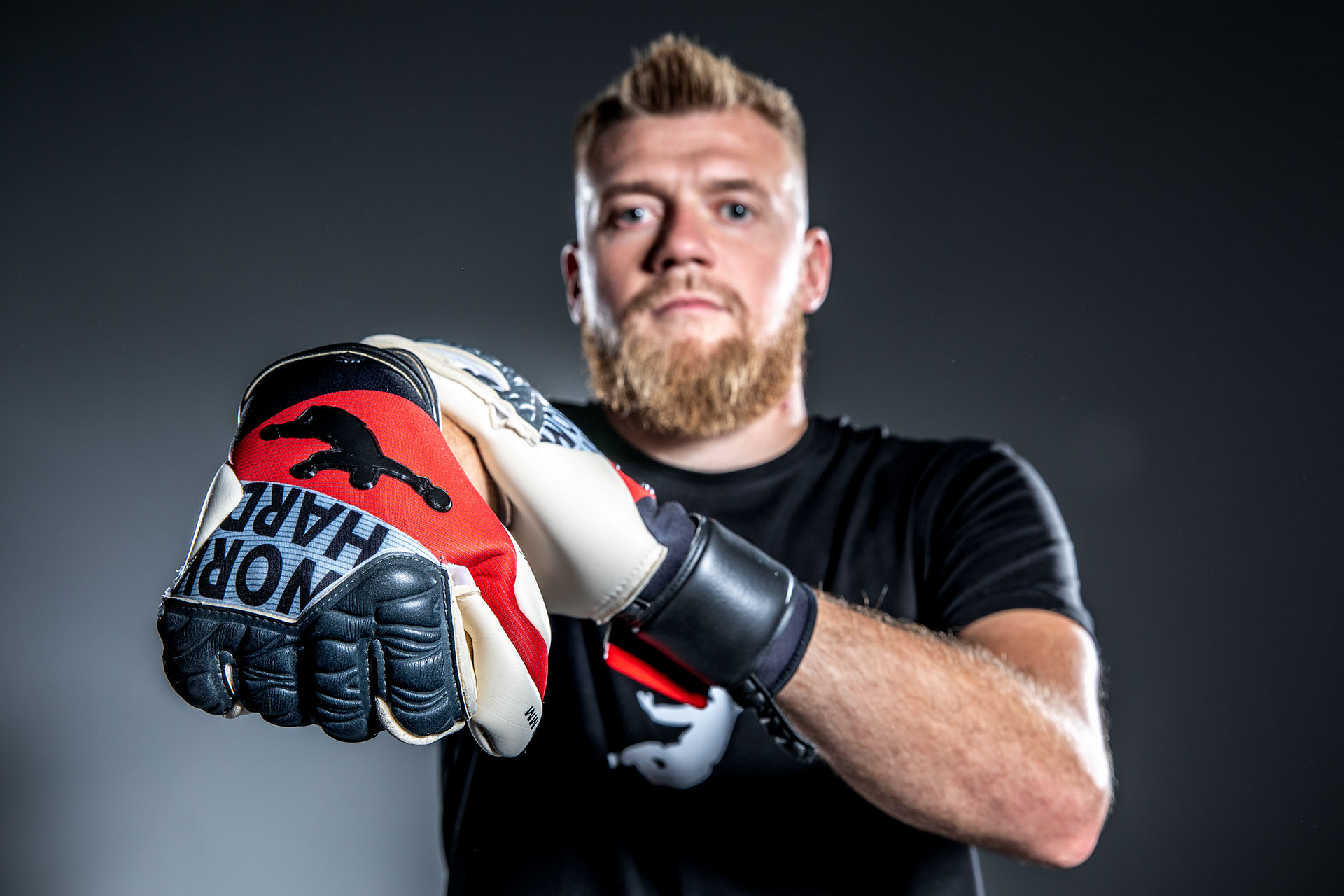 We continue to cooperate with our ambassadors playing in top clubs of Ukraine and other countries, as well as in the national team of Ukraine. The list of our representatives, for example, includes Heorhiy Bushchan, the leading goalkeeper of Dynamo Kyiv, and the national team of Ukraine, who is in the Top 40 of the best football goalkeepers according to The International Centre for Sports Studies (CIES). Our ambassadors are Denys Boyko, Valentyn Morgun, Bohdan Sarnavskyi, Andriy Lunin from Real Madrid, and many others.

In 2021, we released as many as five exclusive models of goalkeeper gloves created in collaboration with top representatives of Ukrainian football — Heorhiy Bushchan, Denys Boyko, and Bohdan Sarnavsky.

Dynamo Kyiv goalkeeper Heorhiy Bushchan already has two personal models. The first is Rain Pro, for which we used a high-class German aqua latex, which minimizes the possibility of slipping the ball and allows you to play with your fist more effectively. The entire fist play area has been significantly changed in the new generation.

Before the decisive game of our national team with Bosnia and Herzegovina, Heorhiy Bushchan received a fresh model of a new generation of Courage White. For our ambassador, we have created an exclusive version of gloves, with a special palm design and a personally selected latex. The logo of our brand has also been slightly reduced, as required by UEFA. Apart from that, it's all the same serial Courage White, with an improved Gecko cut and a stunning design. Convenient fixation technology and tight fit are the distinctive advantages of these gloves. 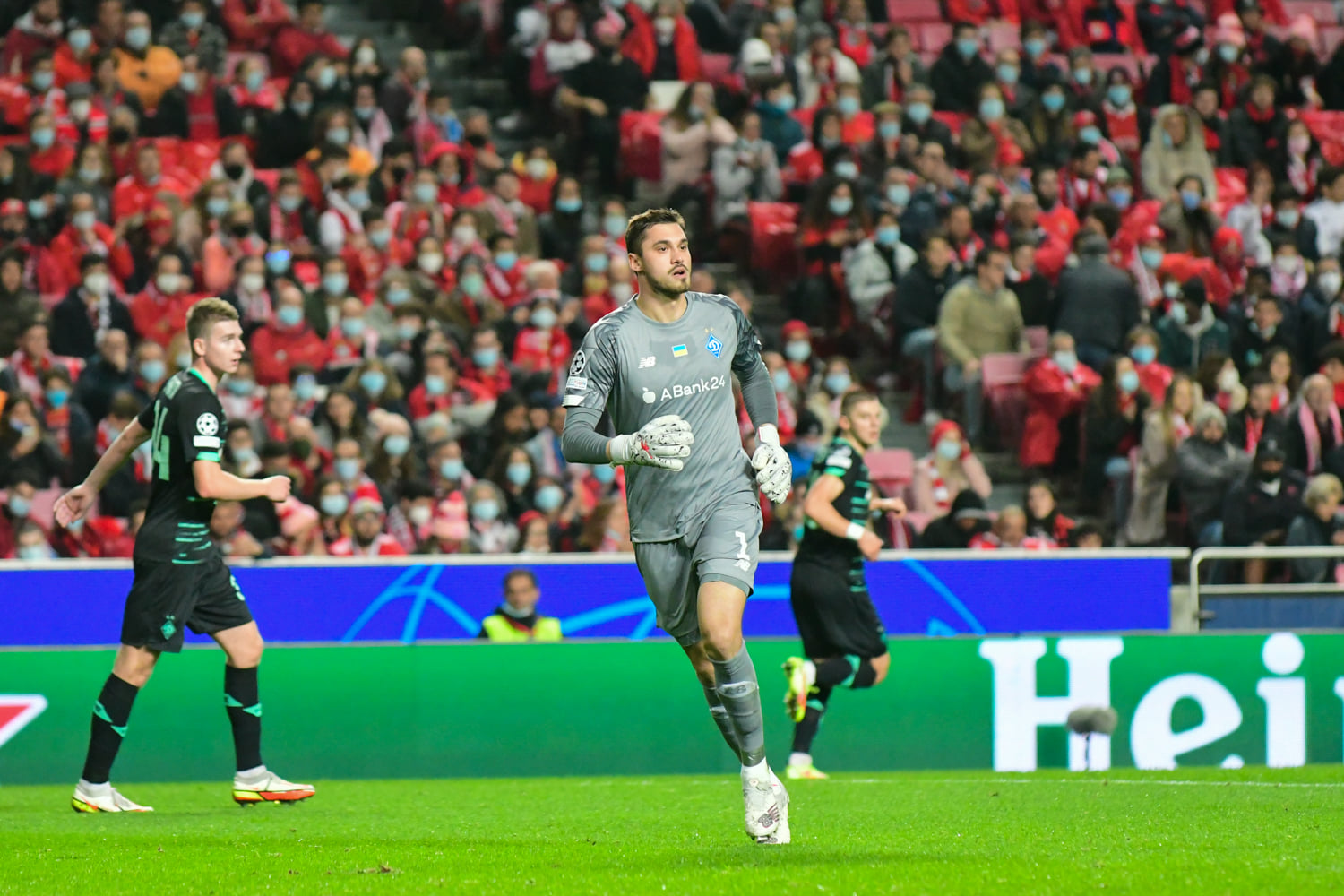 Brave GK Fury gloves for Denys Boyko in the new generation have a significantly updated fist play area, an improved cut, and excellent insulation. The model is made of 4 mm Supreme Aqua Contact Plus German latex with a 4 mm foam lining. On the inside, we used silicone (Fix Fit System) for maximum grip with the ball, and for the fist area, we took a durable silicone-like material that enhances this effect. Lighter, more mobile, and comfortable gloves, protected from cold and wind.

Professional goalkeeper gloves Brave GK Phantom Kong are part of our new collection and are the second exclusive model for Denys Boyko. They have a new bright design developed in collaboration with Denis, as well as a unique modular design with a reinforced fist area, a durable backhand, and a full latex thumb. For the Phantom Kong palm, we took an exclusive white aqua latex, which shows great performance under changing weather conditions. 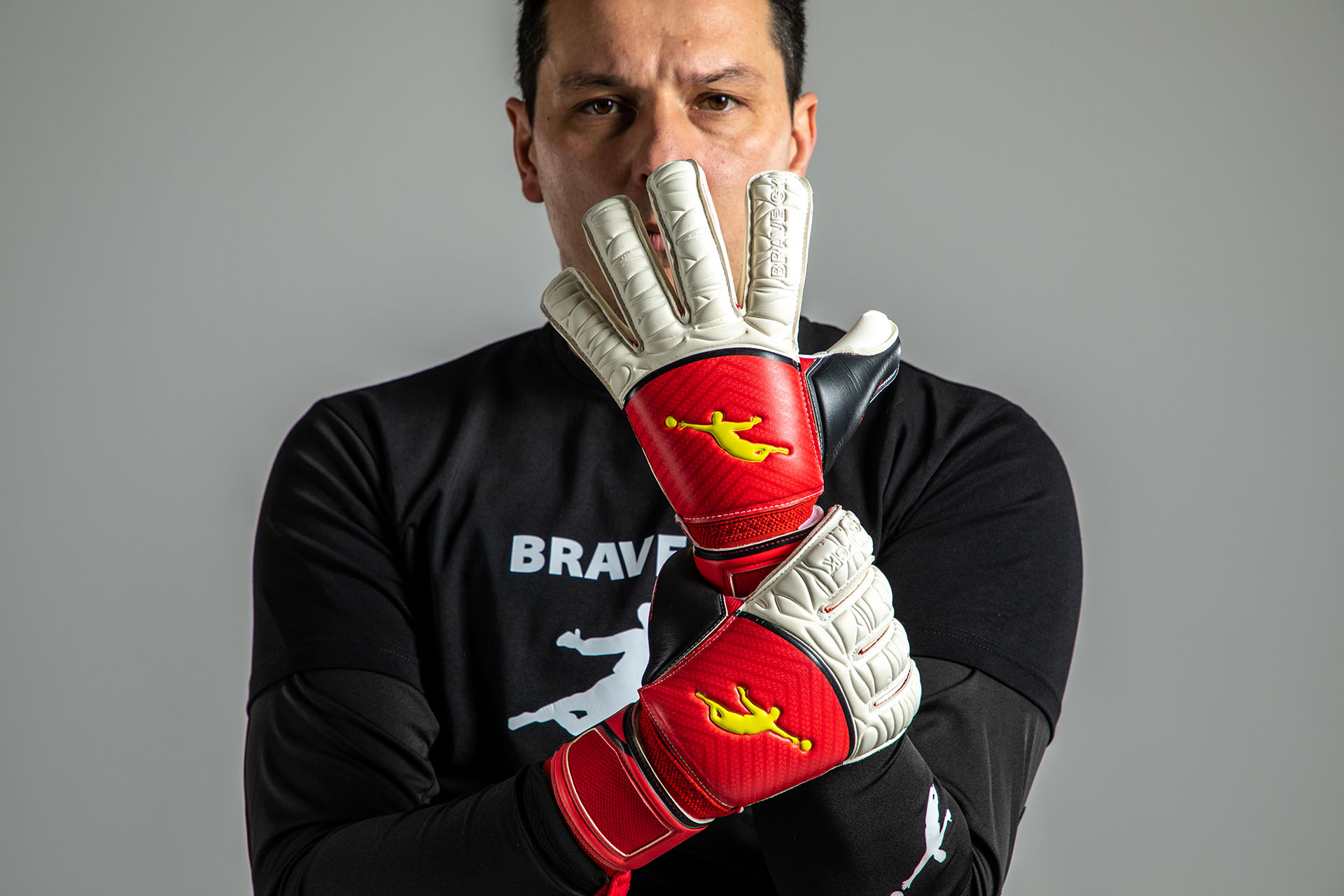 In 2021, we developed and released a personal Phantom White model for our ambassador Bohdan Sarnavskyi, the goalkeeper of Kryvbas (Kryvyi Rih). These goalkeeper gloves have an interesting minimalistic design in white and light green accents and the highest level of grip when playing in the rain. The Phantom White model was released in a limited edition and will not be re-released - a true exclusive! 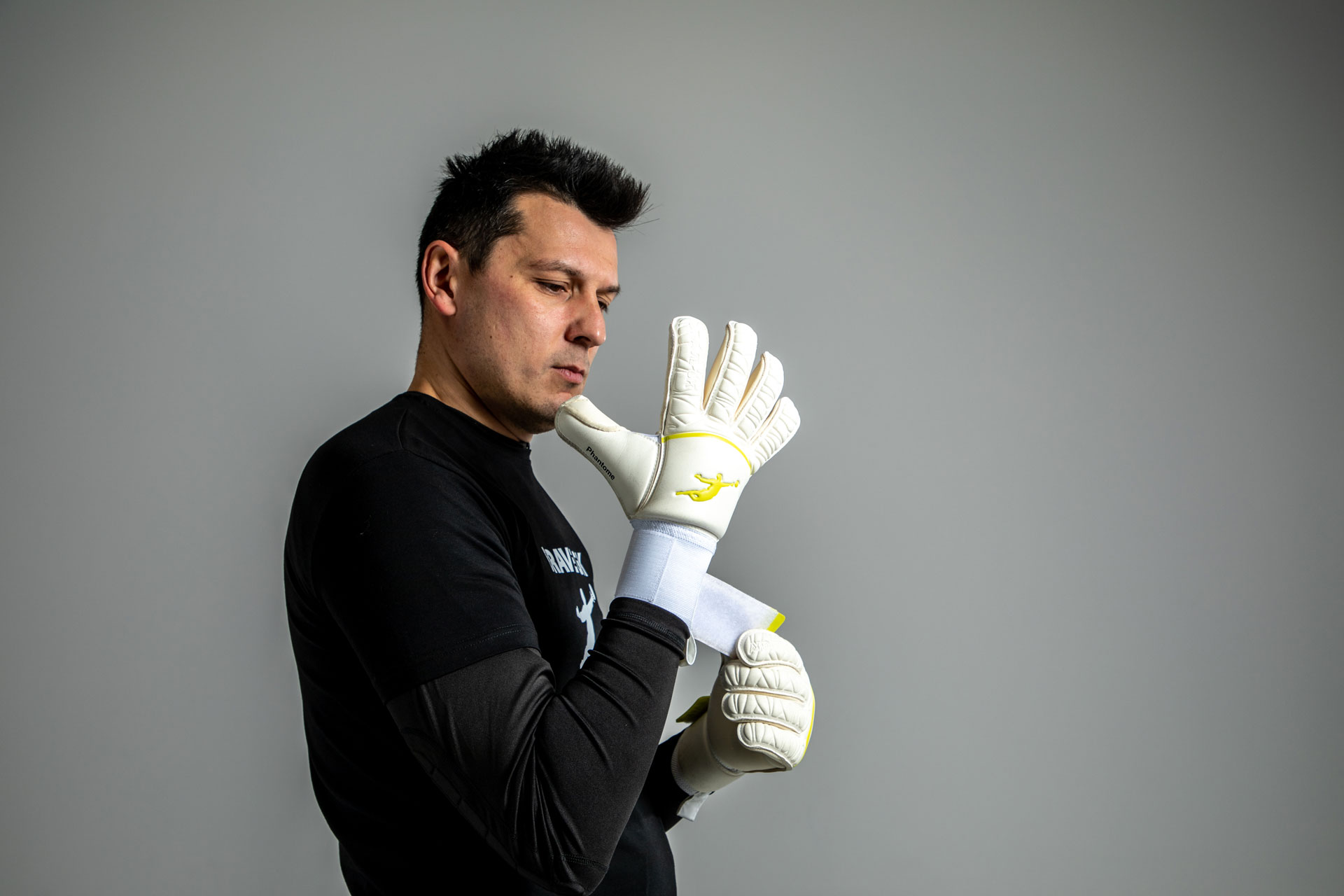 Brave GK customers who choose our gloves and other items of equipment play in clubs all over the world. First of all, this is, of course, Ukraine: the goalkeepers of 12 of the 16 clubs of the Ukrainian Premier League play in our gloves. We also have Ambassador Andriy Lunin, a player of the legendary club of Real Madrid, which plays in the highest division of Spain - La Liga.

And of course, some of our friends and clients played in the Champions League, Europa League, and 2022 World Cup qualifiers in 2021. This is a high recognition - Brave GK equipment meets the high requirements of world football.

The goalkeepers of the male and female national teams play in our gloves. In the men's team, these are Heorhiy Bushchan and Dmytro Reznik, both of whom are our ambassadors and actively represent the brand all over the world. They used Brave GK equipment during the 2022 World Cup qualifiers, in friendly games, and all other official meetings.

Throughout 2021, we have been actively working on a women's line of football equipment. More and more girls are appearing in professional football and we could not ignore this inspiring trend. We are currently finishing work on the women's collection and are planning to officially present it soon. The collection will include women's goalkeeper gloves Brave GK Skill, Winner, Unique, Courage, and several brand new models. This will make Brave GK the first brand in Ukraine to create goalkeeper gloves for women. When developing the series, we took into account all the features of the anatomy of the hands and movements, we adapted technologies and materials for female goalkeepers. 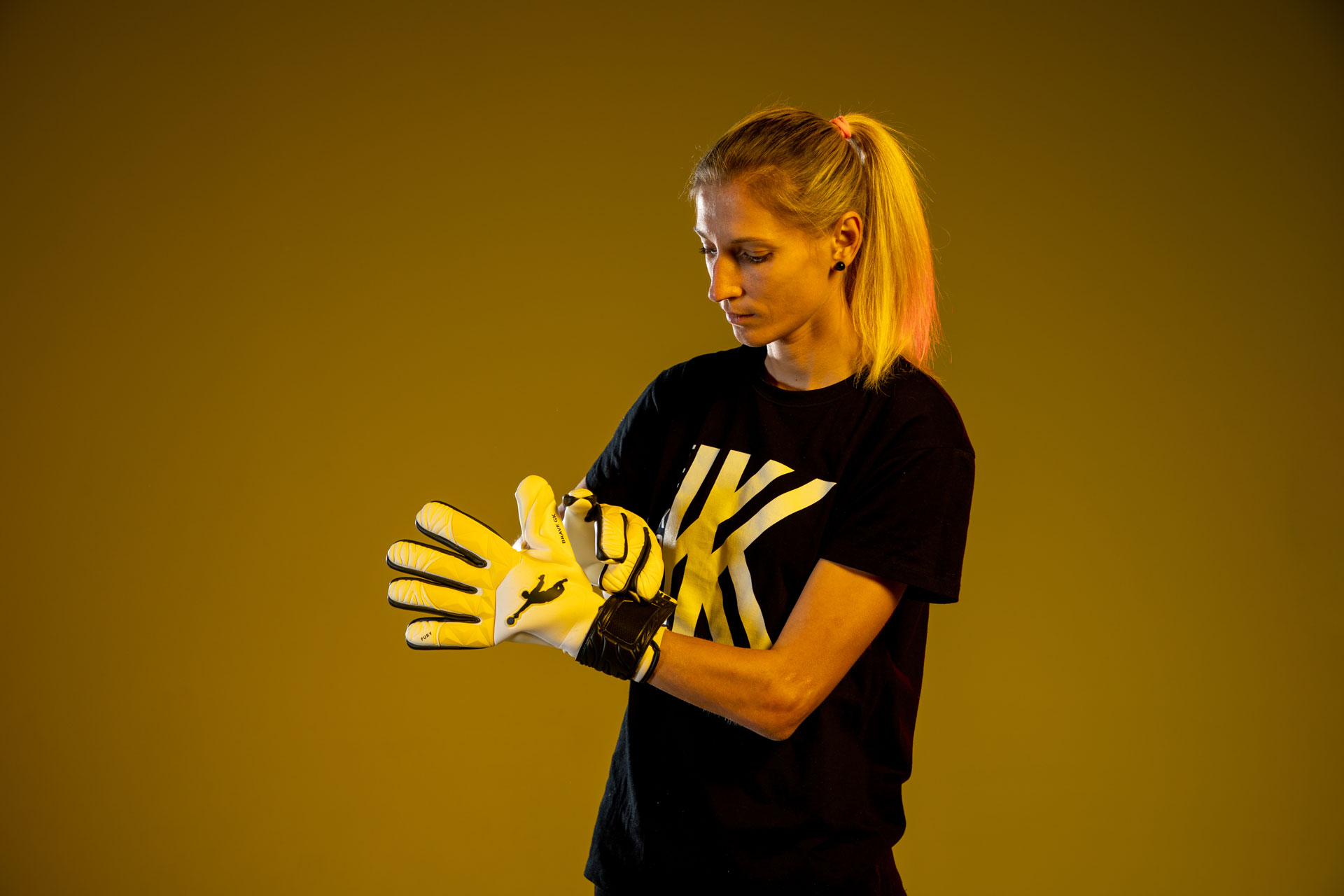 In 2021, the Brave GK brand is expanding its presence in the global market - we have opened the first European office and are starting to work actively in the European market. You can already buy Brave GK equipment in European countries.

In 2021, we managed to significantly expand our presence in the world and establish product distribution in such countries as the Czech Republic, Latvia, Lithuania, Turkey, Poland, Hungary, and Norway. We are already selling branded Brave GK football equipment in these countries, and we plan to increase the list in the coming year.

The most important achievement of the outgoing year for our team was you, our customers, who pushed us forward and took an active part in the life of the brand. Everything we create is for you, and every time we feel happy when we see new successes of our clients on the football field.

We sincerely wish success to all Ukrainian football players who fight in world championships, achieve new personal records and glorify their country. And on this path, we are with you, the Brave GK team! 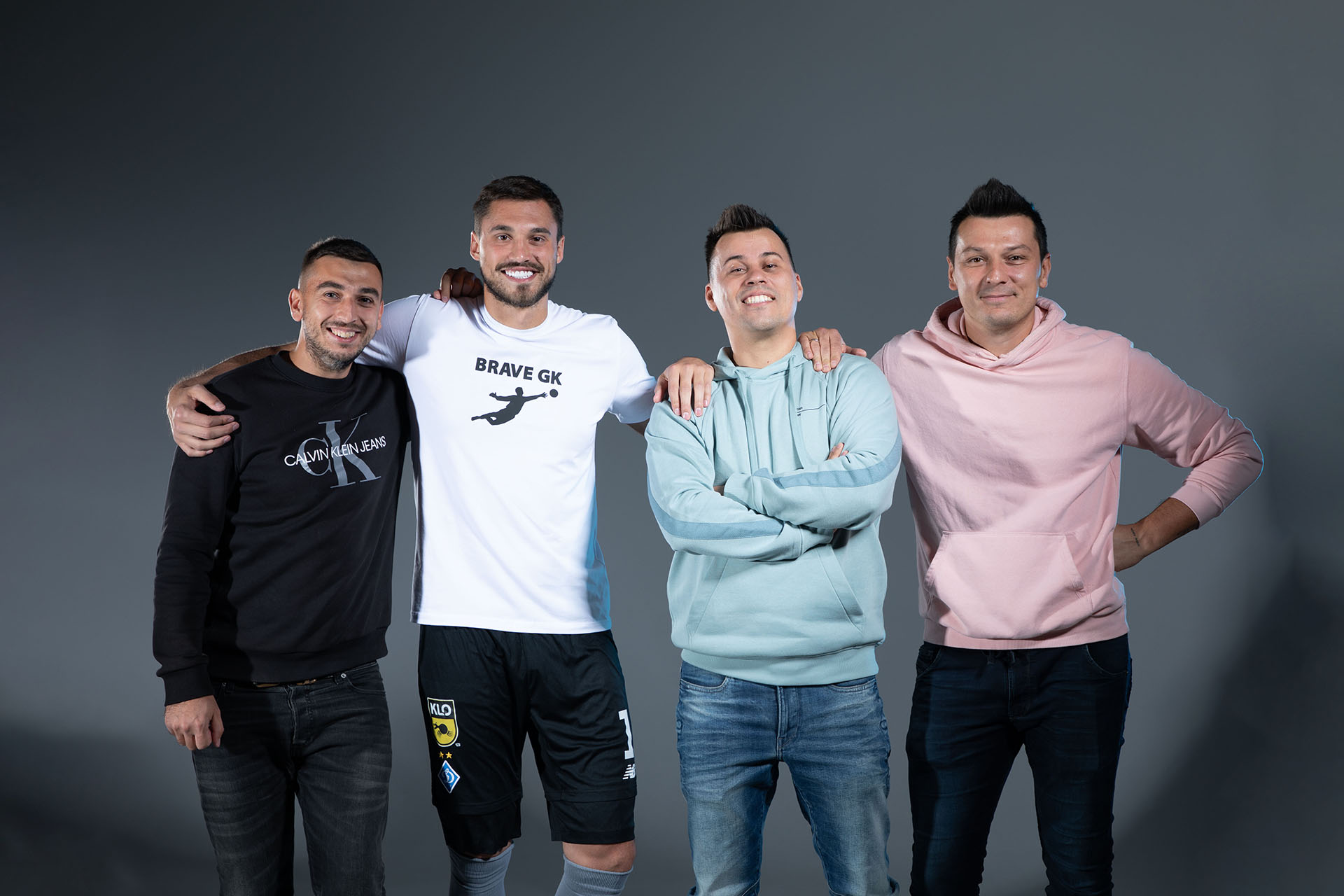 Results of the year: 10 achievements of Brave GK for 2021
Contact Us